Coriander has a lot of health benefits, it is also known as the Chinese parsley, Dhania in India and Coriander in other areas of the world. Coriander leaves are known as Cilantro and the seeds are called Coriander but in the east both of them are considered in the same way as coriander leaves are used raw in cooking for a tastier serving of food. 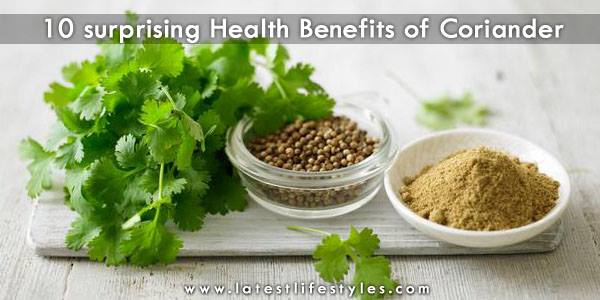 The use of coriander helps deal with skin problems such as rashes, fungal infection and dryness. Anti-septic, disinfectant, detoxifying, antiseptic, antifungal and antioxidant properties of coriander help make that happen.

Coriander leaves contain acids such as linoleic acid, oleic acid, palmitic acid, stearic acid and ascorbic acid (vitamin-C ) which are very effective in reducing the cholesterol levels in the blood.

As a Breath Freshener:

The coriander seeds when dried are used as a mouth freshener and coriander leaves are eaten to mask the smell from the consumption of Garlic and onions.

Coriander in general is high on Vitamins A and C which with other salts in the coriander and its essential oils. All of that help in taking care of your eyes, making sure you don’t have any issue such as blurriness and also reduces strain and stress on the eyes.

Coriander is a natural stimulant, and it regulates proper secretion from the endocrine glands, and that hormonal impact means that it helps regulate proper menstrual cycles and reduces the associated pain during a woman’s period.

The natural anti-oxidants and acids that are in the coriander leaves like Borneol and Linalool, aid in digestion, proper functioning of the liver and bonding of bowels, while also helping to reduce diarrhea. It is also helpful in curing diarrhea caused by microbial and fungal action.

Coriander other than being rich in other nutrients is also a rich source of Calcium. The calcium and the other nutrients in coriander are essential for bone regrowth and durability as well as making the bones stronger for years to come. The center of the coriander plant is rich in calcium.

With its strong aroma and essential oils that are present, coriander helps in digestion problems and as a treatment to eating problems such as anorexia. The proper secretions help in aiding the digestion process.

Coriander is rich in Iron, and anemia is shortage of iron which can cause shortness of breath, heart palpitations and other dysfunctions of the organs. The intake of coriander helps deal with such problems. Iron is essential for the healthy working of the organs and body strength.

Coriander consumed in summers can help get rid of nose bleeds, stoppage of urine, irritation while urinating and other symptoms related to heat illness. Coriander cools your body down in the summers helping you deal with issues such as nosebleeds during the summers.

Coriander essential oil is available in the market with its consistency being watery and the color from transparent to light yellow. The use of coriander oil is that it helps reduce migraines, headaches, nervous weakness, gas and stomach aches, other than that the oil can be used to massage the area of pain, the oil acts as a pain reliever. It has so many benefits but it shouldn’t be taken for people with sexual weakness or pregnant women.