Milk is the first food that a person gets when born. It keeps them safe from all the viruses and the antibodies that it creates help against getting infections and diseases. A new born baby who cannot digest a thing gets his nutrition from milk. That speaks volumes of its importance. In the article below we will be discussing the nutritional value of milk, some facts about it. Other than that we would be discussing the ways that it should be consumed, the best time of consumption and all the related things you need to know about milk in general.

Milk is considered a complete food because it has a variety of rich nutrients that are required for a healthy body. A 250ml serving of milk is equivalent to 250grams of milk and 3 eggs. Cows are the main source of milk around the world and it is considered sacred in India because just as a mother provides milk to her children the cows provide milk for the people, a cow in Indian Culture is highly respected. The breast milk, a child’s first meal is rich in colostrum which is essential for the new born baby’s health. 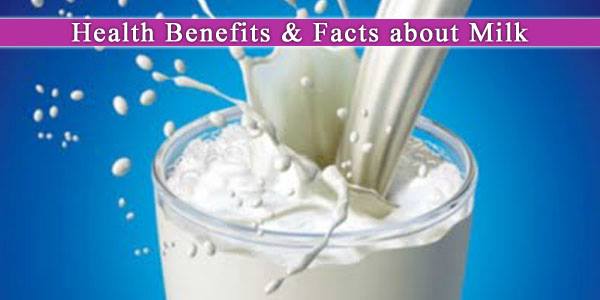 Milk as we know is commonly available but it has three types, suiting the person according to their health condition. A full fat milk has 4% of the fats while the other types include semi skimmed which has about 2% and skimmed which is sold in the market as fat free, having 0.3-0.1% fat. A serving of milk (200ml) provides 37% of the daily calcium intake required. For the same amount of calcium you have to consume more than 11 portions of spinach.

Some facts about cows are that they have the same number of teeth as humans and their daily diets consists of 120kgs of grass and 100 liters of water on a daily basis. The outcome of the consumption is around 20 liters of milk a day for a healthy cow. The unique fact is that although cow milk is universally accepted but goats milk is the best and cow milk being close second, the reason being that it is easily digestible and has higher levels of minerals such as calcium and vitamins. Worldwide goats milk is in higher demand but in the west cow milk is preferred, and goat milk as of now is more expensive than the cow milk.

The best time to drink milk is first thing in the morning, it is generally presumed that the milk is digested by the heat of the sun. Similarly it should be consumed at least three hours before you intend to sleep. Drinking milk just before going to bed is never recommended because it may not get digested properly and can cause night pollutions.

How to Drink Milk

The best way to drink milk is when it is directly milked from the cow or a goat, because raw milk is as sterile as a mother’s milk, yet in towns people don’t have such facility of getting fresh milk and get milk in jars, bottles and tetra packs. For them boiling milk before drinking is the suitable option but it is to be noted that the milk shouldn’t be boiled extensively as the nutrients get destroyed in the process. Whisking milk till froth appears and drinking in sips is the best possible way of consumption.

The health benefits of Milk are immense. Adding raisins soaked in water in the milk and drinking it for forty days improves eyesight, sharpens memory, helps coping with irregular heartbeat, it also purifies semen. Milk also works as a strength promoter, like if you feel your children are weak then add almonds before giving them their daily dose of milk or add half quantity of carrot in a full serving of milk. Both of them would work as a strength promoter. The milk is digested faster and the iron is consumed in the body. In the case of heart burn and acidity, cold milk should be drunk three times a day. When suffering from migraine jalebi with warm milk is the best solution. Drinking hot milk also relieves hiccups if you have such problem. For dark lips a little saffron should be added to the milk and the solution applied by a cotton swab, this would help the lips to lighten up. Milk also helps in problems such as piles, diarrhea, insomnia and indigestion. Other than these benefits milk is rich in iodine and calcium, these two help in prevention against cancer and regular consumption of milk helps in premenstrual issues as well as improving the quality and quantity of semen as well as help erectile dysfunction.

The thing to note is that sugar shouldn’t be added to the fresh milk, as it destroys the calcium element of the milk responsible for making the bones strong. You have to try and make the change if you are used to sweet milk because milk has a naturally sweet taste, but if you still feel the need to make it sweeter add honey, fruit juice, sugar cane syrup or you can use brown sugar as well as an alternative.

To some people drinking milk causes indigestion and gas due to which they avoid its consumption. To avoid having such problem try adding honey to the warm milk it would not only make the taste a little sweeter but help in the digestion process. You can add juice to help aid the digestion become quicker or add cashew nuts, almonds and then drinking it.

The thing to note is that you may not like the taste of milk or you may face issues such as indigestion but the benefits outweigh the cons by a margin. It is a lifestyle choice you have to make to remain healthy and once you have been on the right track you will feel the difference a healthy mind and body has on your life.