According to the historical researches and studies of body building in order to increase our triceps in mass and strength we should perform following Exercises: –

NOTE: While performing this exercise the left arm should be in relaxed position towards the left Ribs like your showing biceps to some one. After finishing 15 raps with first arm perform the same actions with the left arm with same weight and carry out equal raps. 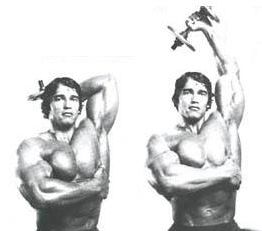 Always use lower weights for the above mentioned exercise and perform 3 sets for each arm. In each set perform 15 raps.

To perform standing dumbbell extensions pick up the heaviest metallic dumbbell with your both arms towards the top and keep your arms, body and legs straight. Now keep the the lower part of the arm close to the head and move the dumbbell downwards in such a way that the lower arm remains straight and the upper part of the arm should carry out the actions. Simultaneously lift the dumbbell upwards and make the arms straight thus resulting in the contraction of triceps. Repeat these actions and carry out 10 raps in each set. 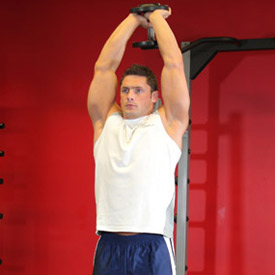 Always use the heaviest Dumbbell for the above mentioned exercise. Perform three sets and in each set carry out 10 raps

There will be a machine in your gym at which you can perform pull ups manually, move to the sides of this machine where you will be watching heavy metallic plates hanging by means string through a metallic hook, there will be an empty hook at the other side of this string which will be hanging like a pendulum at the upper side of the machine. Now pick up the small metallic rod and hand this rod into that empty hook. Now hold this rod by keeping your body straight. Apply pressure and move the the rod downwards along with metallic weights which are attached to the other end of the string and make your whole arm straight. Now bring the rod back in such a way that the upper part of the arm remains straight tilted in the air and the lower part of the arm should carry out the actions thus resulting in the contraction of triceps. Repeat the same action and carry out 3 sets with different strength of weights and raps. 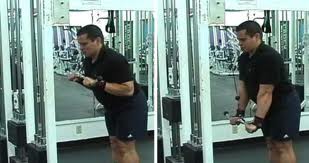 5 Simple Yoga Poses You Can Do at Your Desk

Exercises for Women at Home