Lollywood and Bollywood hottest star Veena Malik is now coming in her new movie “The City That Never Sleeps”. The movie is being produced by Satish Reddy and directed by Haroon Rashid. Veena Malik will be seen sharing screen with Hollywood actor Jeremy Marr Williams. Producer Satish Reddy considered Veena Malik as fabulous actress and he is glad from her performance in a challenging movie.  According to Director Haroon Rashid, Veena Malik has got the ooh factor and a brilliant actress.

It is reported that her new movie will break 20 Guinness World Records including maximum number of kisses in a movie. Veena Mlik wants to be new Bollywood Serial Kisser, she told in an interview that kisses are very important in movies and kisses can cure the world with love. Veena Malik also warned to all heroes to be careful as she come the B-Town Super Serial Kisser.

In her upcoming movie, Veena Malik decided to get zero size figure just like Bollywood Superstar Kareena Kapoor. To get this desired figure Veena Malik started dieting as well as she joined gym to lose her weight. 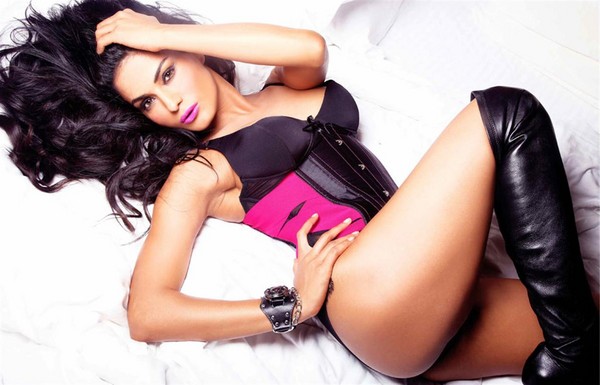 Veena Malik has signed two other movies of Bollywood “Kannada Silk Sakkath Maga” and “Super Model”. Kannada movie is a remake of Vidya Ballen starrer “The Dirty Picture”. Veena Malik tries to get publicity by exposing her in front of camera. It is thinking that Veena Malik’s upcoming movies will get attention of audience through her bold role and nudity.

Veena Malik gave a hot and stunning photo shot for her movie “The City That Never Sleeps”. Once again Veena Malik photo shot is heavily criticized by public from Pakistan. People said that it is a cheap way to get publicity by exposing the body and doing vulgarity.  Here we bring some of her photos from that photo shot,

We welcome our readers to share their opinions and remarks about Veena Malik by commenting against this post.